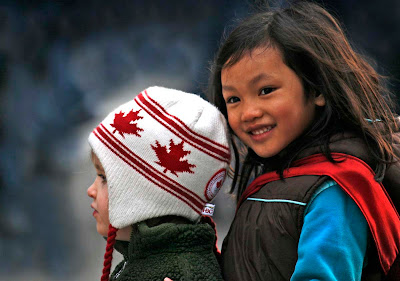 this is my favorite shot of the 450 or so i took today. the walking and shooting is fun, it's the editing that will kill ya... i have a few more keepers, check in tomorrow. i guess its fitting to post a shot of the girls/they're the ones that are winning all the gold medals. congratulation's.

Very cute little girls and the girls are the medalists it seems. Maybe the men's hockey team will be by to-morrow night.

Those two will remember 2010.Nice shot.

to me, this is one of the best shots i've done in along time. i'll post a few images later, showing what they where watching. pretty cool.

Sweet, Doug. Looking forward to seeing the rest.
And you're right ... it's the editing that kills. I delete as many as I can in-camera, then on my tv at home, which is super-fast since it only loads the low-res versions for display. Then I upload the rest to the computer and finish the editing on it. Mind you, the tv editing is simply for weeding out the rejects, not for critical comparison, but it is so much faster when you have a ton of shots like that.

Great photo. Not only are the girls cute, but the photo shows the ethnicity (is that a word?) of the Olympics. You should do a book on the Olympics from "outside the games".

I agree with you Doug...this photo is stunning...

Great idea to do a book of "outside the games".

This does capture the games in terms of what they represent- Outside the arenas. The book idea has merit or at least a video montage- it could be very memorable.

Also Doug - did you notice if these girls had any etra red mittens????
CEO

thxs ceo / i've got my eyes peeled for any wayward red mittens.

peter, i don't edit in camera. i know myself too well. i'd probably erase the whole lot! its interesting that in some cases i have 80 or so frames of one subject, and have to get down to one. in the case of these 2 youngins', i was only able to capture two.. so, easy edit.

Nice feeling with these two kids, Doug. You captured the moment!

thxs gary, had to be quick on the draw to get that one. got lucky.