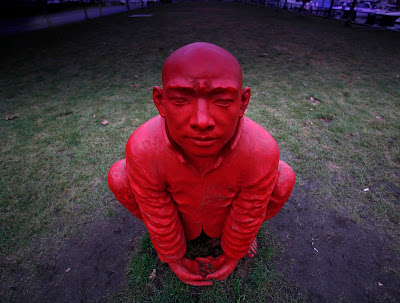 my shot today of a sculpture titled: meeting, by artist wang shugans. the light was low/ i was returning home from a walk to chinatown. i shot many variations / this was my choice. you can see more about this installation at the vancouver biennale 2009 site.
Posted by douglas e. walker at 9:11 PM

Email ThisBlogThis!Share to TwitterShare to FacebookShare to Pinterest
Labels: vancouver bc

It takes a lot of skill to make a sculpture like this-Vancouver has many displays of art--perhaps because of the Winter Games this year?cw

here is the skinny on the shot.

Location : Cardero Park, Vancouver
Media : Painted bronze
Meeting is made up of eight identical life-sized crouching figures in painted bronze by the Chinese artist Wang Shugang. The figures in Asian dress are spare and appear still and fixed. They are contemplative, show no movement but suggest a latent energy; the potential to stand-up or leap. They are striking in their bright "Chinese red", a colour that renders the forms decorative and formal. This red elicits multiple cultural meanings in China. Historically red was a color representing happiness, but it was also the colour of terror during the Chinese Cultural Revolution. Today red is the colour of the faded lettering praising Mao on the ceilings of the factories. "The Chinese flag, the walls of the temple, which coats the Buddhist monks, but also the clothes of a bride in red... said Wang Shugang. "But it is rather the Chinese, glowing red of communism, which I use."

Very interesting history on this sculpture--China has seen great government upheaval in the past years--I dont really know how their government is to-day-friendly to the people or not.CW