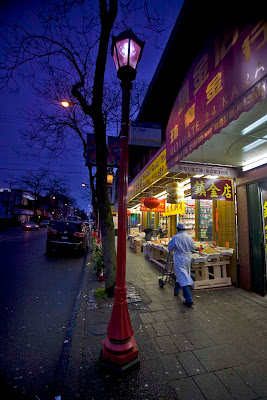 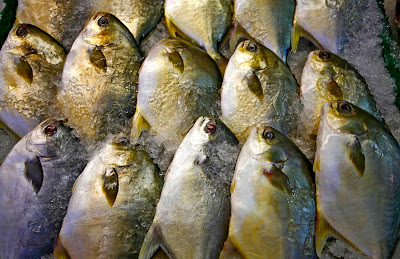 my take on chinatown this aft/eve. lots of fun..
Posted by douglas e. walker at 7:25 PM

Good colors in the first picture and the 2nd one is a good display of fish but I don't know what kind they are cw.

not sure about the species / small yellow jacks of some sort. the light and composition caught my eye.

love the photo of China town. The colours are wonderful. Glad I'm not a fish. Hobie

Photo one is fabulous!

Sad eyes on those fish! And where is Cut Knife?

i guess? i generally look to see how clear they are, indicating freshness..... oh well, its part of chinatown.

cut knife / Cut Knife is a town located on Highway 40, northwest of Saskatoon. It is home of the world's largest tomahawk, located in the Tomahawk Park next to the Clayton McLain Memorial Museum. The tomahawk was built as a symbol of unity and friendship between the First Nations and the white population in this area.

The town is located close to the site of the Battle of Cut Knife which occurred during the Northwest Rebellion of 1885. It has an estimated population of six hundred people.

re: photo one. to look at it now, it's funny because i shot aprox 250 images over the course of 2 hrs, and that was my choice. i was waiting for a merchant to walk thru the frame, and in the final light, one finally did. i just about got hit by a bus...

I have heard of sacraficing for your art, but I think throwing yourself in front of a bus might be a bit excessive...

well, you see, back in my understated phase, i would have never described it that way..

Ah yes, the understated phase...I thought you gave that up after Tom's loud guffaw a few posts back...