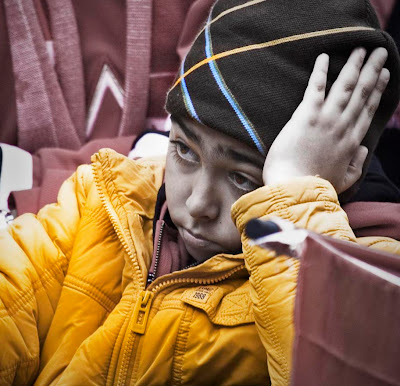 He has had enough for one day. How great to capture that expression that certainly says what words cannot say. cw

could be. he was surrounded by red tho. maybe it was just time for a hotdog...

I think this March 4 boy ("tie game") is in another one of your photos, February 28 ("what a day"). Yellow jacket, same hat, waving a Canadian flag, probably stoked on hot dogs. . . . The girl to his right looks familiar, too. I think she's "hope." Same coat and scarf and hat. What are the odds in a crowd like that and four days later?